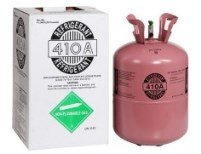 The ancient history of air conditioning refrigerant takes us to Rome, where elaborate waterways or aqueducts were constructed to bring fresh water to the cities. The Romans have successfully used water as refrigerant in their homes and social places. They led cold water through an elaborate system of water ducts in the walls of their homes, chilling the place down. As you can imagine, only the wealthiest citizens could afford water air conditioning. In part because of the complicated set up and in part because water in itself is not such a great air conditioning refrigerant liquid to begin with. But the Romans didn’t know that.

The modern history of air conditioning is founded on refrigerants other than water.

Remarkably, the modern history of air conditioning refrigerant starts with Benjamin Franklin in 1758 who, together with John Hadley used quick evaporation of alcohol and ether to cool down objects below the freezing temperature of water.

Sixty years later, Michael Faraday introduced a cycle of evaporation and compression of the ammonia liquid. Twenty years later, John Gorie used this compressor technology to create ice which was used to cool the air of his patients in a hospital in Apalachicola, Florida.

Willis Carrier of Syracuse, New York invented the first modern, electrical air conditioner. It was first designed to improve the humidity and the air temperature in a printing shop so printed material would always come out right no matter what the temperature outside.

The refrigerators that were used in these first commercial air conditioners were ammonia, methyl chloride, and propane, all combustible or toxic when leaked in the air.

Thomas Midgley, Jr. introduced the first non-toxic chlorofluorocarbon, CFC, gas, Freon. Today, Freon is a trademark of DuPont for any CFC, Hydrogenated CFC, HCFC, or hydrofluorocarbon, HFC blend. Such blends had adopted names such as Refrigerant R-11, Refrigerant R-12, etc. referring to their molecular compositions. The most commonly used of these was a HCFC Refrigerant R-22.

While Freon blends were much safer to the humans than the previously used refrigerants, they were claimed in the 1990s to be harmful to the Earth’s ozone layer. The sales of new Freon-based air conditioners are stopped as of 2010, and even the recycled Freon is being gradually phased out of use by 2020. In its place, the new blend, Puron, or R-410A is introduced. While the Puron is claimed to be ozone friendly, it certainly is not friendly on the air conditioning equipment. It requires much higher pressures to operate effectively, and thus requires stronger piping in the ducts and coils of the air conditioning equipment.

What You Should Know About Refrigerant Leaks In Your System

Why Is My Air Conditioner Making Strange Noises?

Should You Repair Or Replace Your Air Conditioning Unit?

In the hot and humid climate we have in Tampa, FL, a properly functioning air…
Tyler Snyder 2
Air Conditioning Repair
August 19, 2019

What to do if your HVAC suffers storm damage

What to do if your HVAC system gets damaged due to flood and storms? With…
velocity 0